From Barcelona to the Valley...
life is an ultra-marathon 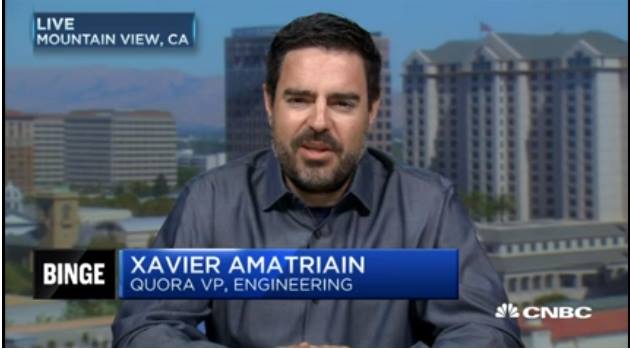 
I am a Computer Science researcher, manager, and technology geek. I have a PhD on Computer Science and a degree in Telecommunications Engineering (roughly equivalent to ECE in the US). I am best known for my work on AI and Machine Learning, and Recommender Systems in particular, but I have also worked on Multimedia and Signal Processing in the past (see my Publications for more details). I have recently moved to LinkedIn where I lead generative AI initiaves across the company. For the last few years before my transition, I worked on my own startup Curai in the intersection of AI and healthcare. Before this, I led the Engineerng team at Quora. Before Quora, I was Research/Engineering Director at Netflix, where I started and led the Algorithms team in charge of the famous Netflix recommendations. In my previous lives I worked at Telefonica Research and also spent two years at UCSB working as the Technical Director of the Allosphere project (See my LinkedIn profile for more details on my positions). I live in Los Gatos, CA, with my wife Natalia. We have been empty nesters for some time as our two wonderful children Aitor and Adriana have moved out. Aitor has already graduated and lives in NYC, Adriana is studying in Iowa. I am originally from Barcelona, and I am a big F.C. Barcelona fan (go Xavi!).

I am currently VP of Engineering, AI Product Strategy at LinkedIn. I report both to the Head of AI and Product, and lead generative AI projects across the company. Fun times.


Before that, I co-founded Curai, and as a CTO I led the team working on making high quality healthcare accesssible to everyone in the world through the use of AI/Machine Learning. I am still an advisor and on the Curai Board of Directors.

Previously, I was VP of Engineering at Quora. My claim to fame is starting and leading the Algorithms team in charge of recommendation, personalization, and search algorithms at Netflix. My technical area of expertise is on Machine Learning, Information Retrieval, Recommender Systems, and Software Engineering/Computer Science in general.


Before that, I was a Senior Research Scientist in Telefonica Research Barcelona.

Years before that, I was Associate Director for the Media Arts and Technology Initiatives (MATi) at the University of California Santa Barbara and Research Director of the CREATE research center at that same university.
where I co-led the Allosphere project.

I created and led the development of the CLAM framework for some time after my PhD. I am no longer active on the project.


You can find below a list of my publications, most of them with a linked pdf. You can also visit my Google Scholar page for more details.

You can download a pdf version of my CV here or you can access my LinkedIn profile.

I am co-founder/CTO at Curai, where we are using state-of-the art AI/Machine Learning to scale the world's best healthcare to every human being. Before this, I was VP of Engineering at Quora where I led the engineering team. Previous to that, I was a Research/Engineer Director for the Algorithms Engineering team at Netflix. I enjoy working on complex problems in the cross-roads of machine learning, software engineering, and team management. I have extensive research and management background.

I have authored more than 50 publications and hold several patents.

As a university professor I have experience in teaching Software Engineering, Information Retrieval, Machine Learning, and many different courses related to Multimedia and Music.

with a focus on Audio and Music


After many years of enjoying teaching many different courses at Graduate and Undergraduate level, I am no longer teaching. Look at my resume if you are interested in my teaching experience that covers courses that go from Information Retrieval and Software Engineering to Computer Music.

Although I started studying music when I was quite little, I did not take it seriously until I was 15. As a teenager I played in a number of bands the most successful of which was the Maijalas.

Carles Lloveras, Xavi Palou, Ramon Valls and I created the Maijalas band. The idea was to mix rock with more latin rithms (nowadays I know that is very common but not so much at that time). Maijalas got to record a demo tape and a CD. We broke up when we were preparing our second CD. Here you have a few samples from our first CD:


I have also done quite a few computer based compositions. Unfortunately because of a severe lack of time in the past few years none of them have made it to a stage in which I would be comfortable sharing them. I have done compositions using MetriX (the language I developed), CSound, CLAM and Pd.

A few years ago, I decided to start running with the goal of sometime running a half-marathon. Now I am completely hooked into running and I have run more marathons than I care to count with a personal best of 3:08. I can now say that running is an important part of my everyday life. More recently, I have started training for a full Ironman. So far, I managed to finish a Half 70.3 in about 7 hours, but there are many things to improve!

If you are a runner, or thinking about it, you might enjoy my blog post on "10 'Little' lessons for life that I learned from running". You can also follow me on Strava or Runkeeper.


I like classical movies like The Godfather or Citizen Cane but my favourite films are a bit more "off-mainstream". I would recommend any film by Jim Jarmush (including Down by Law or Night On Earth), the first films by Gus Van Sant (My Own Private Idaho) and some by Kevin Smith (Clerks or Chasing Amy).


Although I must admit that nowadays I do it much less than I would like - and when I do it is mainly to read technichal books - reading is still one of my favourite activities. You can follow me on Goodreads.

I could make a long list of favourite books and authors but I will try to concentrate on those that most have influenced me. The first book I remember as having influenced me as a child is Michael Ende's Momo (which I found much more impressive/depressive than his famous Never-ending Story). I was quite a lot into J.R.R. Tolkien at that time also.

I really read a lot while I was a child and still did the same as a teenager. During that age I read some impressive books that I still like: any book by Boris Vian is highly recommendable, Tropic of Cancer by Henry Miller, most of Garcia Marquez', some of William Burroughs... (when I was 18 I even read Joyce's Ulyses and even finished it!).

Here you will find a rather unsorted and incomplete list of links related to me.

The MTG at UPF