Ad blockers might be good for the individual consumers that are using it, short term. However, longer term, if successful, ad blockers will shape the Internet in a way that will end up hurting consumers. Let me illustrate this by talking about an obscure Spanish site called La Frikipedia.

Frikipedia was a controversial parody of Wikipedia. It was pretty popular among geeks in Spain because of its smart humor, especially in tech-related topics. The site was involved in many controversies (see Wikipedia article linked above) until it finally decided to shut down in 2015. In the final goodbye (see Despedida y cierre only in Spanish), the owners of the site cite ad blockers as one of the main reasons they can’t make enough money to pay for servers and legal defense. They mention that their audience is typically tech-savvy and that results in most of them blocking ads, leaving them with no resource to make money.

The reality right now is that “only” between 5 and 10% of users block ads. I honestly don’t expect (and hope) this to grow much more. As people start using more ad blocking technology, “good” ads will also learn to circumvent. Otherwise, the end result would resemble the Frikipedia story I mentioned above. You should expect small, targeted sites to close down one after the other.

It turns out that ads is one of the most democratic and user-friendly business model for media content producers. This is somewhat counterintuitive since we would all agree that as users we don’t necessarily benefit from ads. But, think for a minute, if tomorrow all ads stopped working in the internet, what would be the sites that could continue operating? The largest ones that have built a sufficiently large scale to make any other business model feasible. In a world without ads I could see people paying a monthly fee for Facebook, Google, or the New York Times. Would anyone pay for a small site offering cooking recipes? Probably not.

Even companies like Netflix with no ads are basing their success on scale. And some analysis point out that not having ads is actually one of their main risks.

Ads are not evil

Even some people have a completely negative position on ads and ad-supported businesses, I think it is important to understand that ads in themselves are not evil. Yes, we all have experiences with annoyingly bad ads that interfere in your user experience. However, it is also true that many of us like seeing some ads. For example, I really enjoy when I get targeted ads on Facebook or Twitter and I get “informed” of an online sale for running gear or a nearby race I might want to run. On the other hand, there is also a ton of “content” that is even worse than ads. I am sure we have all fallen victim of clicking on one of those “recommended” links that drive to really bad content farms (see example below). 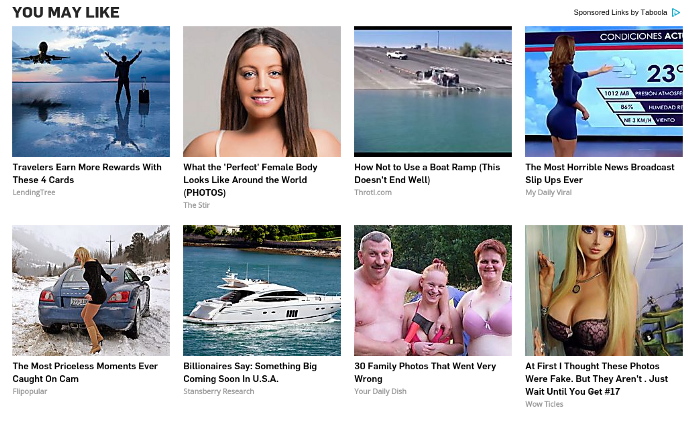 So, ads are not evil. And, even if ad blocking seems like a benefit to consumers in the short term, it will end up creating a less diverse and more concentrated media landscape. This will end up hurting consumers much more than ads themselves.